North of Ithaka: A Journey Home Through a Family's Extraordinary Past (Hardcover) 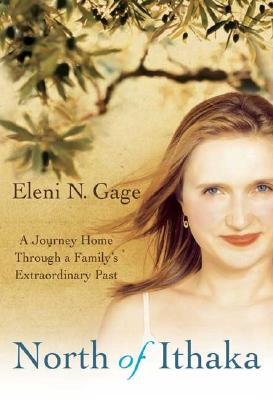 Leaving behind a sparkling social life and a successful journalism career, Eleni Gage moved from New York City to the remote Greek village of Lia. Lia is the same village where her father was born and her grandmother murdered, and which her father, Nicholas Gage, made famous twenty years ago with his international bestseller Eleni.

Her four aunts (the diminutive but formidable thitsas) warned Eleni that she'd get killed by Albanians and eaten by wolves if she moved to Lia, invoking the curse her grandmother placed on any of her descendants who returned to Greece. But Eleni was determined to rebuild the ruins of her grandparents' house and to come to terms with her family's tragic history. Along the way, she learned to dodge bad omens and to battle the scorpions on her pillow and the shadows in her heart. She also came to understand that Greece and its memories were not only dark and death-filled, and that memories of the dead can bring new life to the present.

Part travel memoir and part family saga, North of Ithaka is, above all, a journey home.

ELENI N. GAGE is the child of a Greek-born father and an American mother, and has traveled between those two cultures her whole life. When she was almost three, her family moved to Athens, Greece. After five years there, they settled in Massachusetts, where Eleni lived until she graduated from Harvard University with a degree in Folklore and Mythology, specializing in Modern Greek Folklore.

Now a freelance writer and the beauty editor of People magazine, Eleni has had articles appear in InStyle, Travel+Leisure, Elle, The New York Times, Parade, Real Simple, American Scholar, and many other publications. She divides her time between a tiny high-rise apartment in New York City and a tiny mountaintop house in the village of Lia, Greece.

"Eleni Gage's prose, like the characters in her ancestral village in Greece, bursts with life. Warm, energetic, and ready for anything, Gage is just the sort of person anyone would want to visit---and when she welcomes you into her grandmother's house, her understanding of the porous boundary between comedy and tragedy grants you pleasure when you laugh and catharsis when you weep."
---Anne Fadiman, author of The Spirit Catches You and You Fall Down

"A brilliant story at its heart ...an interesting saga of immigration, belonging, and community."
---The Observer (UK)

"Imbued with forgiveness, with the rebuilding of lives and houses, and moving on from tragedy...In coming full circle [Gage] has helped soothe the pain of a traumatized family."
---The Times Literary Supplement

"Through this moving family memoir, Gage allows us to be present at her rite of passage across that 'psychic barrier' from American to Greek, at the exorcism of a tragic past, and at the blessing of her reborn family house."
---The Sunday Times (UK)

"Part personal memoir, do-it-yourself-manual, historical novel, family saga, and tourist guide, North of Ithaka tells of Gage's attempt to put her cultural confusion to rest by exchanging the skyscrapers of New York for the mountaintops of her ancestral village."
---The List (Scotland)

"A fascinating portrait of a part of Greece seldom seen by tourists."
---Dorset Echo

"North of Ithaka is a sort of cross between Captain Corelli's Mandolin and Driving Over Lemons . . . a monument to family history and an enthralling year spent in Lia."
---The Daily Telegraph (UK)

"A tale far removed from those popular villa-restoration comedies and abounds with setbacks, superstitions, love and the often suffocating bonds of heritage."
---The Australian News