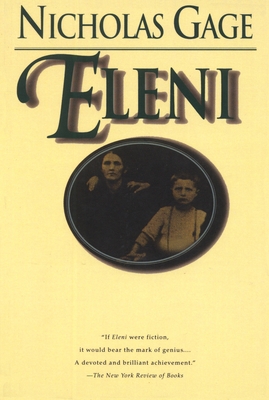 In 1948, as civil war ravaged Greece, children were abducted and sent to communist "camps" inside the Iron Curtain. Eleni Gatzoyiannis, forty-one, defied the traditions of her small village and the terror of the communist insurgents to arrange for the escape of her three daughters and her son, Nicola. For that act, she was imprisoned, tortured, and executed in cold blood.

Nicholas Gage joined his father in Massachusetts at the age of nine and grew up to become a top New York Times investigative reporter, honing his skills with one thought in mind: to return to Greece and uncover the one story he cared about most: the story of his mother.

Eleni takes you into the heart a village destroyed in the name of ideals and into the soul of a truly heroic woman.

Nicholas Gage is the author of several books, including the award-winning Eleni. He lives in North Grafton, Massachusetts.

"A Story Assigned By Fate...Minutely Observed And Eloquently Rendered."

"A Remarkable Work Of 'Faction'...I can think of no higher praise of this book than to say that it is fit to stand as a monument to Eleni Gatzoyiannis."

"Remarkable...Brilliant... Unique...Eleni lives through this book. Her son has done her justice."