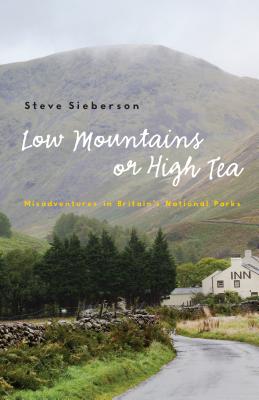 When Steve Sieberson and his wife unexpectedly found themselves in Britain with an entire summer on their hands, they readily agreed to avoid the usual tourist attractions, opting instead for a road trip to the UK’s far-flung national parks. As they set out, however, he envisioned bracing days of energetic hillwalking, while she assumed they would relax in tearooms and cozy pubs.

Seldom planning more than a few days in advance, the two traversed the country in a rented Vauxhall, subjecting themselves to single-track lanes, diabolical signage, and whimsical advice from locals. They discovered a town called Mirthless, a place where cats’ eyes are removed, and a vibrating cottage, while at mealtimes they dove fearlessly into black pudding, Eton mess, and barely recognizable enchiladas. Meanwhile, after their initial attempts at hiking together nearly ended in disaster, Sieberson received dispensation to scramble alone to the highest point in each national park—as long as he was quick about it and left plenty of time for more sedentary pursuits. Low Mountains or High Tea dishes up the charms and eccentricities of rural Great Britain as seen through the eyes of two Americans who never really knew what was coming next.

Steve Sieberson is an adventurer, mountaineer, and travel writer. Educated in both literature and law, he roamed the world as an international lawyer practicing in Seattle, and is now a professor of international law at Creighton University School of Law in Omaha. He is the author of The Naked Mountaineer: Misadventures of an Alpine Traveler (Nebraska, 2014).

“Steve Sieberson’s delightful follow-up to his first book follows the author and his wife, ‘the Italian Woman,’ as they set off on a grand tour of Britain’s national parks. Fans of A Year in Provence and Under the Tuscan Sun will love Low Mountains or High Tea. With a sharp eye for details of culture, climate, and landscape—along with a dash of good humor—Steve Sieberson has written a book every armchair traveler will fall for.”—Brent Spencer, author of Rattlesnake Daddy: A Son’s Search for His Father