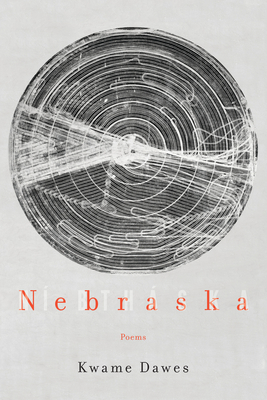 Kwame Dawes is not a native Nebraskan. Born in Ghana, he later moved to Jamaica, where he spent most of his childhood and early adulthood. In 1992 he relocated to the United States and eventually found himself an American living in Lincoln, Nebraska.

In Nebraska, this beautiful and evocative collection of poems, Dawes explores a theme constant in his work—the intersection of memory, home, and artistic invention. The poems, set against the backdrop of Nebraska’s discrete cycle of seasons, are meditative even as they search for a sense of place in a new landscape. While he shovels snow or walks in the bitter cold to his car, he is engulfed with memories of Kingston, yet when he travels, he finds himself longing for the open space of the plains and the first snowfall. With a strong sense of place and haunting memories, Dawes grapples with life in Nebraska as a transplant.

Kwame Dawes is Chancellor’s Professor of English and Glenna Luschei Editor of Prairie Schooner at the University of Nebraska–Lincoln. He is the author of twenty-one books of poetry and author or editor of numerous other books of fiction, criticism, and essays. Dawes’s most recent books include the poetry collections City of Bones: A Testament and Punto de Burro and the novel Bivouac. He is director of the African Poetry Book Fund, editor of the award-winning African Poetry Book Series, and artistic director of the Calabash International Literary Festival. The winner of numerous awards for his writing and service to the literary community, Dawes was elected a chancellor for the Academy of American Poets, named a fellow of the Royal Society of Literature in 2018, and won the prestigious Windham Campbell Award for Poetry in 2019.

"As the poet contemplates the wealth of opportunity that seems innate—now, as well as when the plains people first saw the land, concluding in Prairie that the wide-ranging opportunity must be home to imagination and continual new beginnings. This is where Nebraska meets the poet most intimately, as a place of riches and with a history of new beginnings."—Jordan Charlton, Adriot Journal
— Jordan Charlton