Floating in the Deep End: How Caregivers can See Beyond Alzheimer's (Hardcover) 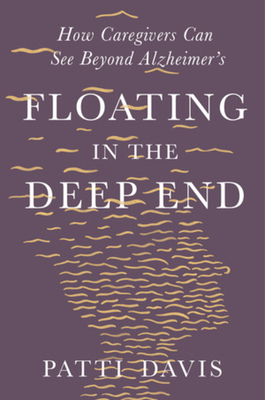 With the heartfelt prose of a loving daughter, Patti Davis provides a life raft for the caregivers of Alzheimer’s patients.

“For the decade of my father’s illness, I felt as if I was floating in the deep end, tossed by waves, carried by currents, but not drowning,” writes Patti Davis in this searingly honest and deeply moving account of the challenges involved in taking care of someone stricken with Alzheimer’s.

When her father, the fortieth president of the United States, announced his Alzheimer’s diagnosis in an address to the American public in 1994, the world had not yet begun speaking about this cruel, mysterious disease. Yet overnight, Ronald Reagan and his immediate family became the face of Alzheimer’s, and Davis, once content to keep her family at arm’s length, quickly moved across the country to be present during “the journey that would take [him] into the sunset of [his] life.”

Empowered by all she learned from caring for her father—about the nature of the illness, but also about the loss of a parent—Davis founded a support group for the family members and friends of Alzheimer’s patients. Along with a medically trained cofacilitator, she met with hundreds of exhausted and devastated attendees to talk through their pain and confusion. While Davis was aware that her own circumstances were uniquely fortunate, she knew there were universal truths about dementia, and even surprising gifts to be found in a long goodbye.

With Floating in the Deep End, Davis draws on a welter of experiences to provide a singular account of battling Alzheimer’s. Eloquently woven with personal anecdotes and helpful advice tailored specifically for the overlooked caregiver, this essential guide covers every potential stage of the disease from the initial diagnosis through the ultimate passing and beyond. Including such tips as how to keep a loved one hygienic, and careful responses for when they drift to a time gone by, Davis always stresses the emotional milestones that come with slow-burning grief.

Along the way, Davis shares how her own fractured family came together. With unflinching candor, she recalls when her mother, Nancy, who for decades could not show her children compassion or vulnerability, suddenly broke down in her arms. Davis also offers tender moments in which her father, a fabled movie star whom she always longed to know better, revealed his true self—always kind, even when he couldn’t recognize his own daughter.

An inherently wise work that promises to become a classic, Floating in the Deep End ultimately provides hope to struggling families while elegantly illuminating the fragile human condition.

Patti Davis is the author of many books, including The Long Goodbye. Her support group, Beyond Alzheimer’s, is now licensed at Geisinger Medical Center in Pennsylvania and Cleveland Clinic in Las Vegas. She lives in Santa Monica, California.

Davis writes about practical aspects of caregiving that she and other Beyond Alzheimer’s members have encountered.... Davis very eloquently describes feeling 'as if I was floating in the deep end, tossed by waves, carried by currents, but not drowning.' Davis is a wise, thoughtful, empathetic, skilled, graceful support for the many people facing AD in a loved one. A must-read.
— Marcia G. Welch, Library Journal, starred review

Her bracing narrative is a vital supportive resource for anyone navigating the choppy waters of Alzheimer’s within a familial network. A heartbreaking yet hopeful journey through the painful chaos of a loved one’s compassionate care.
— Kirkus Reviews